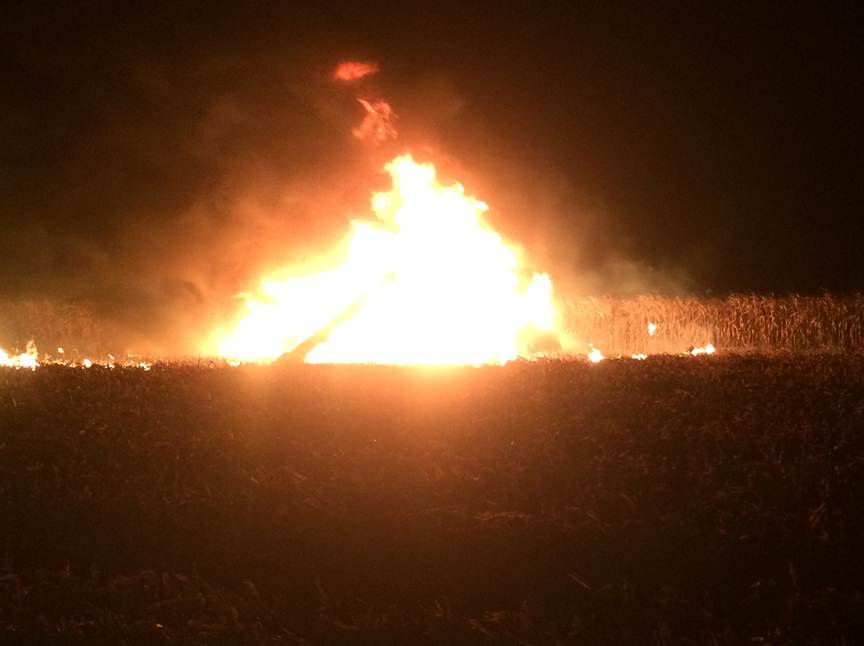 It’s usually not our desire to share bad news, but we thought this might be a good time to for you to get some information straight from the horse’s mouth. Yesterday was a wet day, but we decided by afternoon to try some corn right across the road from the shop. One of the combines that was set up for corn at the moment has tracks, so we decided just to run that one machine and limit any compaction issues. Tony took the combine to the field, Trent and Bob ran the auger carts, and Brian, Jeff, and Parker started trucking.

About 8:00 last night the wind was blowing pretty strong out of the south. As Tony headed south into the wind, a fire started somewhere near the back of the machine and probably got stoked pretty good in the wind. Tony then turned and started coming back north. He noticed sparks blowing past his cab and realized there was a fire. He stopped the machine and about then the flames came on each side of his cab! We actually call Tony Superman anyway, but Tony played the part well as he opened the door and jumped off the top of the platform. At that time the combine became totally engulfed in flames. Tony sustained burns on his legs and face. The worst are on his legs (he was wearing shorts). They took him to Eskanazi hospital. He is going to be alright. The next 72 hours or so are critical to see the worst of his burns start to heal instead of going the other way. If things happened to not heal right, then a skin graft might be in the works.

The bottom line is that this was a fluke accident. It is not totally unusual to have a small combine fire maybe once every other year or so, but we have never had a combine burn completely up. The other unusual thing is just the speed at which the fire spread to the cab. We have never heard of a combine fire where the driver was in such peril, so quickly. The wind was just really working against us.

We are so thankful that Tony is going to be alright and that nobody else was hurt. Once again, we were proud of the rest of the guys, jumping in and making good decisions in a pretty scary situation. It was inspiring to have about 40 friends, family, and neighbors circled for prayer in the middle of the Eskanazi Hospital Emergency Room. We’d appreciate it if you could keep Tony in your prayers over the next few days especially.