Our Family of Companies 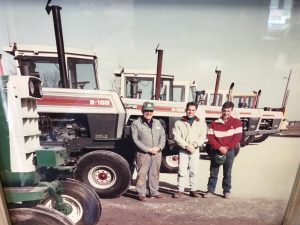 Robert Lamb grew up in Indianapolis where his father ran a flying service for Shank Airport. At that time, there was no connection to farming, just a dream. He received a business degree from Butler University and married Diana Bymaster in 1959. They spent four years in the Air Force, mostly in Italy. In 1963, they rented their first farm and began what’s become a family tradition.

As farming practices improved, Lamb Farms grew steadily through the years. In 1963, Bob rented 240 acres and raised cattle, hogs, and sheep. Today Lamb Farms owns 3,200 acres and rents an additional 6,000 (An acre is about the size of a football field.) to produce dozens of varieties of corn, popcorn, corn seed, wheat, and soybeans. Livestock has been eliminated from the operation except for the hobby animals for fun and education.

Lamb Farms, Inc., was formed in 1984 as it became apparent that Dean and Don both were interested in sharing the ownership of the farm. Bob, Diana, Dean and Don are the current stockholders.

Lamb Farms, Inc. is proud to have an exceptional team. Bob Basey, Mike Fishell, Dennis Carrell, Jeff Jones, Alex Lamb, Ashley Lamb, Adam Lamb, Jon Shultz, and Brian Smith are full-time employees. Each is extremely important to the everyday operation and success of Lamb Farms, its AgRecycle division, and its AgriStewards division. Farming today requires a great deal of technical expertise as well as responsibility in the operation of large, complex equipment.

It is a blessing to be able to farm. As farms get larger and efficiency improves, fewer and fewer people are needed to make a crop or raise an animal. It is, therefore, important for those people to be safe and responsible. We are keenly aware that conservation and environmental concerns are a high priority to achieve success. The spread of urban living makes it imperative that we make the best use of available land and that we work with non-farmers in the community to be good neighbors.

Bob and Diana are the parents of five children. Mary lives in Salt Lake City, Utah. Gordon lives with his wife, Diane, near Louisville, Kentucky. Amanda lives in Lebanon with her husband, Tad, and their five children: Isaac, Thomas, Jacob, Bella, and Caroline. Dean and Don are part of Lamb Farms. Dean and his wife, Debbie, have three children: Ashley, Alex, and Adam. Don and Jodie have four children: Shelby, Emma, Riley and Faith.

Family is the most important aspect of this “family farm.”

Lamb Farms is unlike many other family farms you’ll find. Our success has grown from our ability to merge technology, resource conservation, and business efficiencies with the personal touch and accountability you only find with a small family farm. Bottom line, it gives all our land owners peace of mind that we treat their farm as if it was our own.

Our advantages can be categorized in three areas: 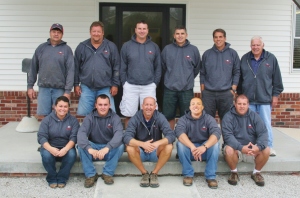 It’s our people at Lamb Farms that truly makes the difference to our success. Averaging nearly a decade of experience per employee means our staff carries a vast knowledge of our process and principles. We love that our land owners become acquainted with them as much as they are with us.

Our diversification in other business areas have not only provided other means of financial stability to our farm, they also have provided tangible benefits to our mission of serving our land owners and our mission to “Farming God’s Way.”

Lamb Farms Agronomy
A large portion of our success is due to our investment in a full-time agronomy department at Lamb Farms. For each of our properties we farm, our agronomy division provides all of the soil sampling and mapping. They compile yield data, application maps, and other functions such as topography mapping. They also are good “crop scouts” as well as a great asset in timing the purchase of input supplies to maximize our return for land owners.

AgRecycle
AgRecycle is our 10-acre compost manufacturing site that is permitted with the Indiana Department of Environmental Management (IDEM). Area resources are tapped to cost-effectively provide us with nutrient rich organic wastes that we then turn into compost. This compost is used to enrich the process of building soil organic matter for our land owners’ properties. Through this division, fields under our direction get a minimum of 5 tons per acre each year of this compost we are creating.

AgriStewards
We are blessed that our work and expertise allows us to invest in supporting many humanitarian efforts important to us. One of those is our own non-profit AgriStewards. Brian Smith is our director, focused on helping communities in third-world countries learn the skills to sustain themselves through “Farming God’s Way”. We are excited for the amount of communities we have touched and changed their way of life through this program.