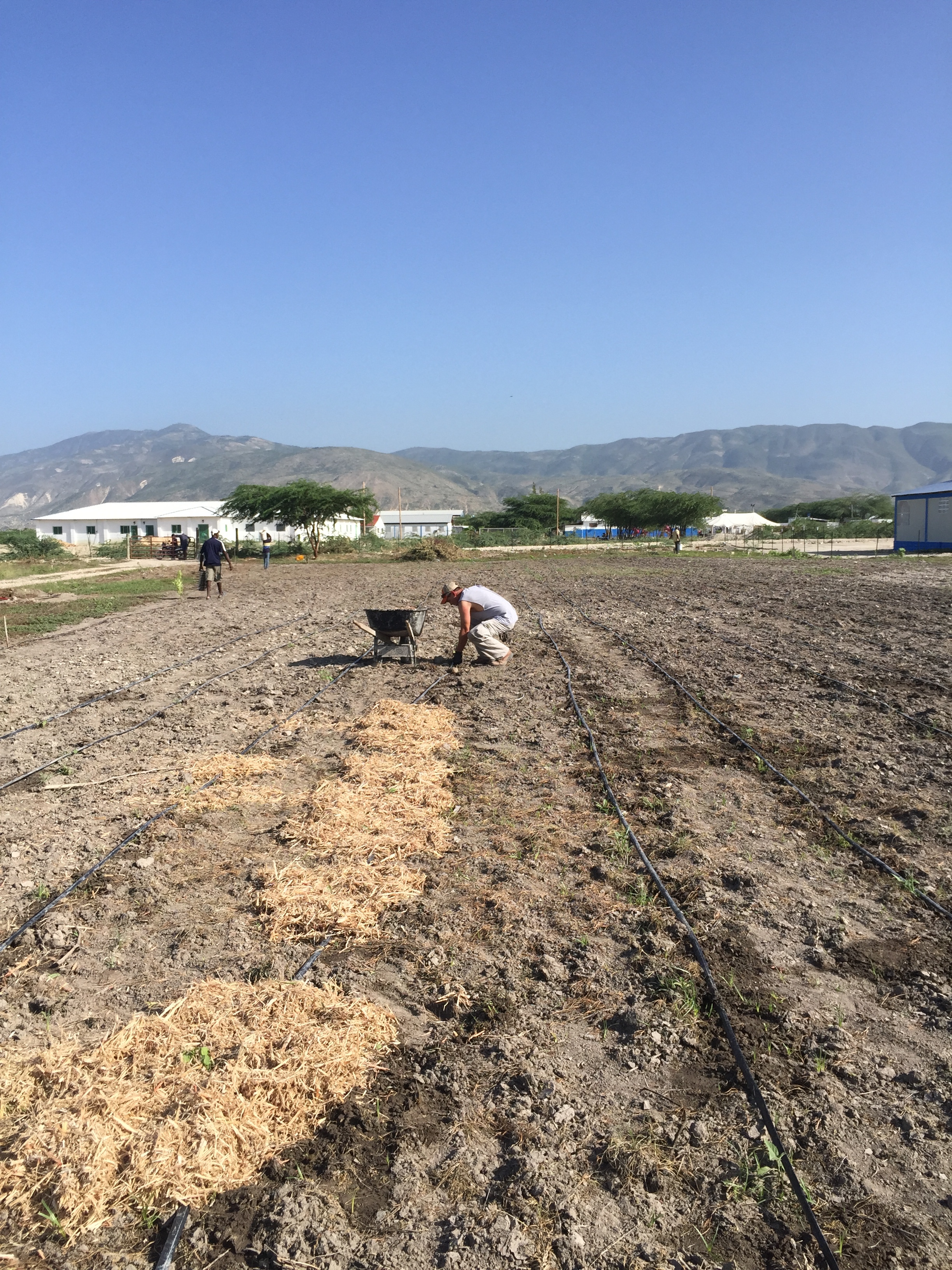 Many of you are familiar with the non-profit organization called AgriStewards that we started back in 2011.  My 15-year old daughter, Riley and I went on an impromptu trip to Haiti this past week to help with some ag work that we have done in the past.  The following is my journaling of the trip. 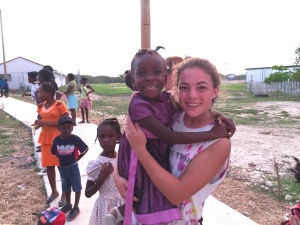 Riley with her friend, “Baby Rose”, who isn’t a baby anymore.

“Even if you tried, you couldn’t capture it”. We were looking at the beautiful sunrise from the airplane window as we left Fort Lauderdale on the way to Port-au-prince. I started to pull out my phone to take a picture and Riley gave me those words. She was right, and I just put my phone back. It really made me excited for this time in Haiti, because it reminded me that the next few days would be like that. So many sights, sounds, and smells that can only be experienced in real-time. I’ll try to capture some of it, but my ability to describe and remember will never match the moments we get to live out this week.

Our trip has been a spontaneous one. So far, it has been unpredictable. Pastor Pierre came to our house a little more than a week ago. He was in Indiana to take Carissa to Indiana Wesleyan. We talked about Haiti, the opening of the hospital, and the agriculture project. Wilde has still been working on the “farm”, but they have had very limited success. Haiti has been in a drought for about 3 years now, with very sporadic rainfall and the practice of simply planting and watering has not been effective or sustainable. Pastor asked me if I would consider coming to Haiti sometime in September while JL Williams would be there. I told him that harvest would come for me by mid-September. He phoned JL and found out exactly when he was planning to come, and it was only a week away. I had a sense that God was in the timing as there was no real reason I couldn’t go. Riley jokingly (maybe) said, “Hey, I could go with you”. I jokingly replied, sure! The more I thought about it, the less it became a joke. What a great opportunity for she and I.

Our travel plan was not ideal because we had to fly through Charlotte and Fort Lauderdale to get to Port-Au-Prince. The layover in Fort Lauderdale was only 36 minutes. Sure enough, our flight out of Charlotte was delayed 30 minutes for “maintenance”. We missed the connection in Fort Lauderdale. The unpredictable part of the journey has come. We felt a real peace that our time would be redeemed. After all, we will get into Port-Au-Prince by 8:11 the next morning so we should get a pretty good day of work in. Riley and I had a real special night in Ft. Lauderdale. We went out to eat at TGIF and then caught the movie, War Room. Wow, what an inspirational movie. It is such a good reminder of how prayer needs to be strategic. God is in control. It is not our job to change people (or countries, or cultures). It is our job to pray and get out of the way. It was also special to call home and talk to Jodie and Faith after they watched the same movie at the same time.

Today we got up at 3:15 to make the 4:00 shuttle to the airport in Fort Lauderdale. Everything went smooth…arrived on time and everything was ok. The first reminder that we are in Haiti was that instead of pulling up to the gate, the plane unloaded us on the tarmac and we took a bus to the terminal. When we went in, it was dark…no electricity. They still took our $20 to get into the country. They still took us through customs. We got to baggage claim and the airport workers were climbing through a small whole where the bags are usually sent onto the machine and they were bringing the bags through one by one and setting them on the floor. The man that Pastor Pierre sent in to help with our bags found us because we are somewhat unique in Port-Au-Prince. He was a nice enough guy until I didn’t want to pay him because Pastor Pierre usually takes care of that outside. He got pretty insistent, so I paid him and pushed my own cart.

Over the last few weeks, God has been really working on me. I have constantly been drawn to scripture and devotions that remind me to pray more. Oswald Chambers August 23rd devotion used Mathew 6:6 that talks about going into the “secret place” to pray. The movie “war room” was about just that. The idea that we should not fight but we should let God fight for us keeps coming back. As I think about why I am in Haiti right now, what can I really do? This country is still such a mess. The government is corrupt. There are more NGO’s in this country alone than all the other countries combined and few of them coordinate anything. Haitians are into multiple generations of getting their primary sustenance from others. What am I going to do? I have reminded myself that it is not my job to help Haiti. God can do what He wants all by Himself. It is my job to get closer to God. That will lead me to do my part while I am here.

Pastor Pierre picked us up at the airport with his usual joyful attitude. He is a true friend. On Par with Haiti experience, we needed to take care of just one thing before we go to the NVM campus. Pierre’s water pump had quit and his house didn’t have any water. We went to 3 different supply houses in Port-Au-Prince before we found the suitable solution. Then we went to his house to plumb it up. The PVC unions don’t match up of course, so there needs to be a little tweaking. The threads on the new pump don’t match the threads on the PVC. There is going to need to be another trip somewhere to find the right parts. We arrived in Haiti at 8:11 and it was about noon now, so thankfully Pastor Pierre thought is was time to get us to the campus. When you only have 3 days to work, the time is precious.

As soon as we arrived on the familiar NVM campus, you could tell that JL Williams was there. There was a buzz of activity, most of it centered on planting trees, flowers, and general landscaping. We went out to see the “garden” or the farm, as I like to call it. I was pleased with how it looked. The main difference was that the frame that held the water tank for irrigation had had rusted and collapsed, so there was a new concrete structure being completed that will hold 6000 gallons of water. It looks great. There is still a ton of drip irrigation stretched over the land…not as pretty and straight as I like, but functional. We worked to straighten out the line where we would plant watermelon. I also spent quite a bit of time on the backhoe, digging out scrub trees and moving material. It was so good to see the crew at NVM…Wilde, Mckendy, Clerice, Lupson, Ricardo, Amos, Michel, Paul, Eric, Clersondy, Clement, and more that I recognize but just don’t know their names. For whatever reason, NVM has done a great job of keeping a consistent workforce. Most of those men have been there a long time. I told them through an interpreter that one thing I hated about Haiti was that I couldn’t talk to them. We were doing a devotion and I was also making the point that it is hard to have a deep relationship if you don’t communicate and it is the same in our relationship with God. There is no language barrier with God; we just don’t take advantage of the opportunity to talk. 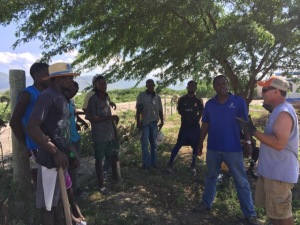 Teaching some of the Haitians about the importance of using God’s resources wisely and doing things to a high standard.

Each night we were there, JL taught and Clerice interpreted. JL is an extremely knowledgeable man. He just goes… no notes, just a Bible and a bunch of knowledge. I learned or re-learned several things in my time listening to him. I did my normal run both mornings we were there. They’ll let you out of the gate at 6 and if you run to the road and back and then to Chambrun and back, it takes about 35 minutes.

My “team” was Riley. While Riley and I make a good team and she works really hard, it is not possible for us to accomplish a whole bunch of planting. I am most proud and hopeful for our row of watermelons. We dug holes, applied goat manure in the bottom, covered that up with some great black dirt that Pastor found somewhere, planted the seed and covered that with “God’s blanket”. The mulch is Sugar Cane bagas that has been shredded… great stuff. We did also plant a row of eggplant, something I don’t like, but the Haitians aren’t too picky. 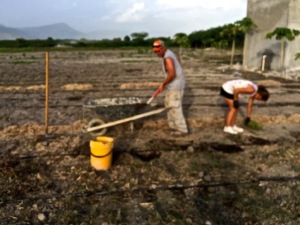 There were two main accomplishments of the trip from a mission perspective. I think we re-established a relationship with the guys at NVM. I do really appreciate them, even though they sometimes drive me nuts. It has reminded me how the idiosyncrasies of the Haitian culture work against our American nature. With a trusting relationship, some of those problems can be minimized. The other accomplishment is just the reminder of the importance of using manure and mulch in combination with the drip irrigation system. They are in the habit of just planting the seed in the soil and then running the drip line to it. They can provide the water, but they still don’t have the nutrients, the water use is very inefficient, and the heat from sun is not insulated at all.

It was a great trip that once again, I cannot fully describe in a few words. Brooke is the nurse there that has been there the longest. I admire her very much. She said that Haiti is like a love-hate relationship for her. Everything about Haiti is hard. While there is evil everywhere in the world, it seems more oppressive in Haiti. So for her, the victories are sweeter. The natural beauty is there. The health problems can be improved. Some orphans have a semblance of a home. She hates the frustration that is in Haiti, but she loves the opportunity to see God redeem Haiti one life at a time.

The best part was just being able to share the trip with Riley. She is such a great young lady. She really worked hard in the garden and never complained. She loves the relationships that she has developed with some of the kids over several years now. Her favorite part of the trip came on the last night when Brooke invited her over to the orphanage to watch “Home Alone 2” on the front porch. It didn’t matter that it was in French. She just loved watching those kids laugh, eat popcorn, and cuddle. She’s got a real servant’s heart and I really enjoyed spending this week with her.