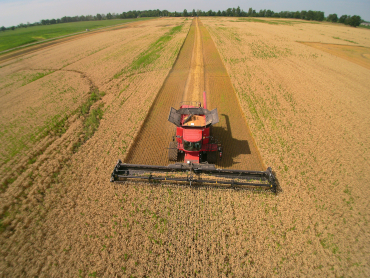 The bottom line is that we had a great year – with our all-time highest yields of both soybeans and corn.
The last half of the season was a challenging one with rainy weather. Some corn stalk health was not so great, there were areas that fell over prematurely. It is a little more difficult to get, but we were able to get the majority of it.

We wrapped up on November 8, which seemed to be the end of good weather. It looks as though many of those that didn’t get grain harvested by then are still working at it or waiting for the opportunity. As I look around there are a lot of fields with crops still standing. It will be a challenge to not only get into the fields, but to get good yields out of it.

By mid-harvest we were concerned about having enough storage space and considered bagging and storing on the ground. The more we thought about it, the less we liked that idea. Fortunately, we were able to rent an older grain system nearby from a farmer who had stopped using it. Those bins will soon be torn down in the path of development, but they sure came in handy for one last crop!

My brother Dean manages all the trucking and storage and at times it felt like we were putting grain in every nook and cranny we could find. Being in the field driving the combine is the easy job – Dean had to figure out where it was all going to go.

Time to plan ahead

To me this is the fun time of year, shifting gears from fall harvest to planning for next year. One challenge we have for this year, as many farmers around do, is the wet conditions kept us from getting enough post-harvest work done.

We were still able to get in cover crops before it became too wet but we couldn’t spray for winter annual weeds. We may still be able to put down fertilizer when the ground freezes, but without the fall herbicide we’ll have more weed pressure than we’d like in the spring.

Such a successful crop year is difficult to repeat in 2019. While we’ve picked up a few additional acres for next year, we will most likely be able to handle all of next year’s harvest without adding any new storage. Even though we can’t count on record yields, it sure is fun to put the plans in place to give the crop every opportunity to perform.